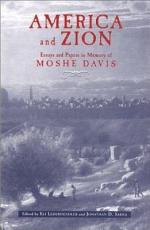 Book Description:
Moshe Davis was a preeminent scholar of contemporary Jewish history and the rounding head of the Institute of Contemporary Jewry at the Hebrew University of Jerusalem. A recognized leader in the field of bicultural American/Jewish studies, he was a mentor to educators and academics in both Israel and North America and an active colleague of American Christian scholars involved in interfaith study and dialogue. These wide-ranging essays, many of them presented at a colloquium that Professor Davis had planned but did not live to attend, honor him by exploring the theme of Zion as an integral part of American spiritual history and as a site of interfaith discourse. Not only do these essays stress the role of individuals in history, but they also incorporate views outside those of mainstream religions. American attitudes toward the land of the Bible reflect both Jewish values that arose from their abiding attachment to Zion and the uniquely American Christian vision of a utopian pre-industrial, pre-urban, pre-secularized world. Whereas American Christians expected to be lifted out of their ordinary lives when they visited the Holy Land, Jews saw in their affinity for Zion a strong link to their American environment. Jews viewed America's biblical heritage as a source of practical values such as fair play and equality, social vision and political covenant. In inviting such comparisons, these essays illuminate the relationship of Judaism to America and the richness of American religious experience overall. 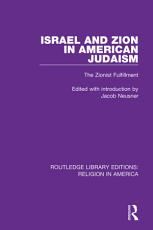 Book Description:
First published in 1993, Israel and Zion in American Judaism: The Zionist Fulfillment is a collection of 24 essays exploring the concept of who or what is "Israel" following the establishment of the Jewish State in 1948 and the subsequent crisis of self-definition in American Jewry.

Book Description:
Leading Jewish poets, essayists, journalists, activists, scholars, and writers, reflecting a broad diversity of opinion and perspectives share their reflections in a collection of essays on the ongoing crisis in the Middle East as they address such topics as the link between American Jews and Israel, the need for Palestinian justice and Jewish survival, and the meaning of Zionism. Original. 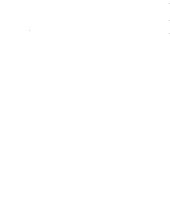 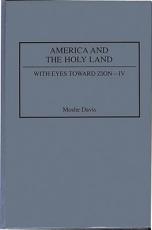 Book Description:
The continuing relationship between America and the Holy Land has implications for American and Jewish history which extend beyond the historical narrative and interpretation. The devotion of Americans of all faiths to the Holy Land extends into the spiritual realm, and the Holy Land, in turn, penetrates American homes, patterns of faith, and education. In this book Davis illuminates the interconnection of Americans and the Holy Land in historical perspective, and delineates unique elements inherent in this relationship: the role of Zion in American spiritual history, in the Christian faith, in Jewish tradition and communal life, and the impress of Biblical place names on the map of America as well as American settlements and institutions in the State of Israel. The book concludes with an annotated select bibliography of primary sources on America and the Holy Land. 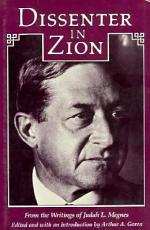 Book Description:
For nearly half a century, until his death in October 1948, Judah Magnes occupied a singular place in Jewish public life. He won fame early as a preacher and communal leader, but abandoned these pursuits at the height of his influence for the roles of political dissenter and moral gadfly. During World War I he became an outspoken pacifist and supporter of radical causes. Settling permanently in Palestine in 1922, he was a founder and the first president of the Hebrew University. Increasingly, he viewed rapprochement with the Arabs as the practical and moral test of Zionism, and the formation of a bi-national state of Arabs and Jews became his chief political goal. His life interests thus focused on the core issues that confronted and still confront the Jewish people: group survival in democratic America, the direction and character of the return to Zion, and thereconciliation of universal ideals with Jewish aspirations and needs. Dissenter in Zion draws upon a rich corpus of private letters, personal journals, and diaries to offer a moving account of an eloquent and sensitive person grappling with the great questions of the day and of an activist striving to translate private moral feelings into public deeds through politics and diplomacy. We see Magnes disagreeing with Brandeis over the leadership and direction of American Zionism and with Weizmann and Ben-Gurion over ways to achieve peaceful relations with the Arabs; defending himself against charges by Einstein that he was mismanaging the affairs of the Hebrew University; and persistently negotiating with Arab leaders, trying to reach a compromise on the eve of the establishment of the State of Israel. Dissenter in Zion also contains a biographical essay on Magnes by Arthur Goren, assessing his ideas and motives and placing him in the context of his times. It shows Magnes's profundity without covering up his weaknesses, his lifelong tactic for courting repeated defeat in favor of long-term goals that could not come to pass in his lifetime. 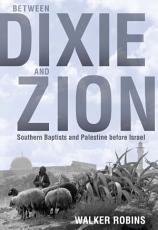 Book Description:
Explores the roots of evangelical Christian support for Israel through an examination of the Southern Baptist Convention One week after the establishment of the State of Israel in 1948, delegates to the Southern Baptist Convention (SBC) repeatedly and overwhelmingly voted down resolutions congratulating fellow Southern Baptist Harry Truman on his role in Israel’s creation. From today’s perspective, this seems like a shocking result. After all, Christians—particularly the white evangelical Protestants that populate the SBC—are now the largest pro-Israel constituency in the United States. How could conservative evangelicals have been so hesitant in celebrating Israel’s birth in 1948? How did they then come to be so supportive? Between Dixie and Zion: Southern Baptists and Palestine before Israel addresses these issues by exploring how Southern Baptists engaged what was called the “Palestine question”: whether Jews or Arabs would, or should, control the Holy Land after World War I. Walker Robins argues that, in the decades leading up to the creation of Israel, most Southern Baptists did not directly engage the Palestine question politically. Rather, they engaged it indirectly through a variety of encounters with the land, the peoples, and the politics of Palestine. Among the instrumental figures featured by Robins are tourists, foreign missionaries, Arab pastors, Jewish converts, biblical interpreters, fundamentalist rebels, editorialists, and, of course, even a president. While all revered Palestine as the Holy Land, each approached and encountered the region according to their own priorities. Nevertheless, Robins shows that Baptists consistently looked at the region through an Orientalist framework, broadly associating the Zionist movement with Western civilization, modernity, and progress over and against the Arabs, whom they viewed as uncivilized, premodern, and backward. He argues that such impressions were not idle—they suggested that the Zionists were fulfilling Baptists’ long-expressed hopes that the Holy Land would one day be revived and regain the prosperity it had held in the biblical era.

Book Description:
American aliyah (immigration to Palestine) began in the mid-nineteenth century fueled by the desire of Americans Jews to study Torah and by their wish to live and be buried in the Holy Land. This movement of people -- men and women increased between World War I and II, in direct contrast to the European Jewry's desire to immigrate to the United States. Why would American Jews want to leave America, and what characterized their resettlement? From New Zion to Old Zion analyzes the migration of American Jews to Palestine between the two World Wars and explores the contribution of these settlers to the building of Palestine. Joseph B. Glass details the scope and scale of this migration, outlines the characteristics of the immigrants, and constructs profiles of four distinct immigrant groups -- orthodox, middle-class agriculturists, urban professionals, and halutzim (pioneers). Glass studies the motivational factors for emigration from the United States, sources of information and available resources required for settlement, and the political barriers to migration. He examines the activities of the American Zion Commonwealth and its purchase and development of land in Palestine, as well as the settlement initiatives of various American companies and ahuza societies. Glass explores the role of individual men and women in urban and rural settlement on privately purchased and Jewish National Fund land. From New Zion to Old Zion draws upon international archival correspondence, newspapers, maps, photographs, interviews, and fieldwork to provide students and scholars of immigration and settlement processes, the Yishuv (Jewish community in Palestine), and American-Holy Land studies awell-researched portrait of aliyah. 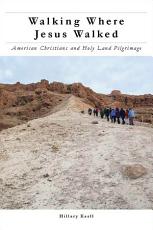 Book Description:
Since the 1950s, millions of American Christians have traveled to the Holy Land to visit places in Israel and the Palestinian territories associated with Jesus’s life and death. Why do these pilgrims choose to journey halfway around the world? How do they react to what they encounter, and how do they understand the trip upon return? This book places the answers to these questions into the context of broad historical trends, analyzing how the growth of mass-market evangelical and Catholic pilgrimage relates to changes in American Christian theology and culture over the last sixty years, including shifts in Jewish-Christian relations, the growth of small group spirituality, and the development of a Christian leisure industry. Drawing on five years of research with pilgrims before, during and after their trips, Walking Where Jesus Walked offers a lived religion approach that explores the trip’s hybrid nature for pilgrims themselves: both ordinary—tied to their everyday role as the family’s ritual specialists, and extraordinary—since they leave home in a dramatic way, often for the first time. Their experiences illuminate key tensions in contemporary US Christianity between material evidence and transcendent divinity, commoditization and religious authority, domestic relationships and global experience. Hillary Kaell crafts the first in-depth study of the cultural and religious significance of American Holy Land pilgrimage after 1948. The result sheds light on how Christian pilgrims, especially women, make sense of their experience in Israel-Palestine, offering an important complement to top-down approaches in studies of Christian Zionism and foreign policy.