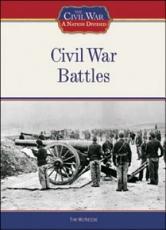 Book Description:
A look at the various battles of the Civil War.

Book Description:
An engaging guide to the people, places, and events of America's Civil War. 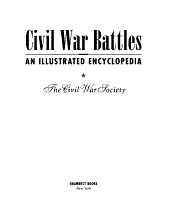 Book Description:
A fully illustrated, accessible encyclopedic collection in an A-to-Z format of essays on every significant Civil War battle, with authoritative text prepared by the Civil War Society. Includes maps and archival illustrations and photographs. 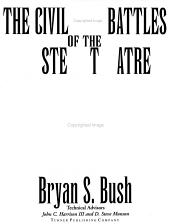 Book Description:
Never has anything comparable to this massive volume been published on the Western Theatre in America's War Between the States. Bush takes the reader through every major battle in the West complete with an order of battle listing all units involved for each confrontation. Richly illustrated with nearly 700 photographs maps, charts and drawings to embellish each detailed account. You'll see extraordinary full color features of some of the most outstanding artifact collections in the world, all of Western Theatre battles and men who fought them. 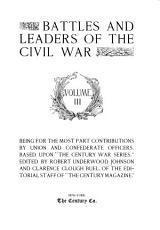 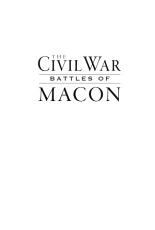 Book Description:
Macon was a cornerstone of the Confederacy's military-industrial complex. As a transportation hub, the city supplied weapons to the Confederacy, making it a target once the Union pushed into Georgia in 1864. In the course of the war's last year, Macon faced three separate cavalry assaults. The battles were small in the grand scheme but salient for the combatants and townspeople. Once the war concluded, it was from Macon that cavalry struck out to capture the fugitive Jefferson Davis, allowing the city to witness one of the last chapters of the conflict. Author Niels Eichhorn brings together the first comprehensive analysis of the military engagements and battles in Middle Georgia.

Book Description:
Though the First and Second Battles of Newtonia did not match epic Civil War battles like Antietam, where over thirty-five hundred soldiers were killed in a single day, and Gettysburg, where twice that number died in three days of fighting, such smaller engagements were just as important to the men who lived through them. The ones who didn't were just as dead, and for a brief time at least, the combat often raged just as violently. With the approach of the sesquicentennial of the war, some of the lesser-known battles are finally getting their due. Join local resident and historian Larry Wood as he expertly chronicles both Battles of Newtonia, the first of which, in 1862, was the Confederacy's first attempt to reestablish a significant presence in Missouri and the only Civil War battle in which American Indians took opposing sides, fighting in units of regimental strength. The second battle--a fight that was fierce and furious" while it lasted--stands as the last important engagement of the Civil War in the state." 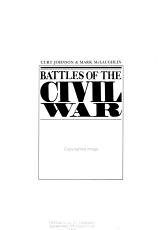 Book Description:
The accounts of twelve Civil War battles, preceded by a concise background to the war, explaining causes and summarizing weapons, equipment, organization and tactical aims of both armies, as well as profiles of the leading generals. 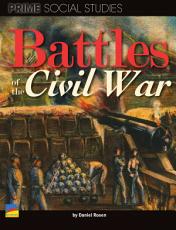 Book Description:
The Civil War tested the new political experiment that began with the American Revolution. In this guide to the battles and leading figures of the war that tore America apart, readers will find a wealth of images, from pictures of artifacts to portraits and battlefield paintings and maps.