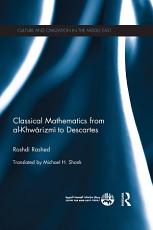 Book Description:
This book follows the development of classical mathematics and the relation between work done in the Arab and Islamic worlds and that undertaken by the likes of Descartes and Fermat. ‘Early modern,’ mathematics is a term widely used to refer to the mathematics which developed in the West during the sixteenth and seventeenth century. For many historians and philosophers this is the watershed which marks a radical departure from ‘classical mathematics,’ to more modern mathematics; heralding the arrival of algebra, geometrical algebra, and the mathematics of the continuous. In this book, Roshdi Rashed demonstrates that ‘early modern,’ mathematics is actually far more composite than previously assumed, with each branch having different traceable origins which span the millennium. Going back to the beginning of these parts, the aim of this book is to identify the concepts and practices of key figures in their development, thereby presenting a fuller reality of these mathematics. This book will be of interest to students and scholars specialising in Islamic science and mathematics, as well as to those with an interest in the more general history of science and mathematics and the transmission of ideas and culture. 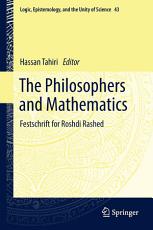 Book Description:
This book explores the unique relationship between two different approaches to understand the nature of knowledge, reality, and existence. It collects essays that examine the distinctive historical relationship between mathematics and philosophy. Readers learn what key philosophers throughout the ages thought about mathematics. This includes both thinkers who recognized the relevance of mathematics to their own work as well as those who chose to completely ignore its many achievements. The essays offer insight into the role that mathematics played in the formation of each included philosopher’s doctrine as well as the impact its remarkable expansion had on the philosophical systems each erected. Conversely, the authors also highlight the ways that philosophy contributed to the growth and transformation of mathematics. Throughout, significant historical examples help to illustrate these points in a vivid way. Mathematics has often been a favored interlocutor of philosophers and a major source of inspiration. This book is the outcome of an international conference held in honor of Roshdi Rashed, a renowned historian of mathematics. It provides researchers, students, and interested readers with remarkable insights into the history of an important relationship throughout the ages. 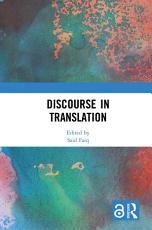 Book Description:
This book explores the discourse in and of translation within and across cultures and languages. From the macro aspects of translation as an inter- cultural project to actual analysis of textual ingredients that contribute to translation and interpreting as discourse, the ten chapters represent different explorations of ‘global’ theories of discourse and translation. Offering interrogations of theories and practices within different sociocultural environments and traditions (Eastern and Western), Discourse in Translation considers a plethora of domains, including historiography, ethics, technical and legal discourse, subtitling, and the politics of media translation as representation. This is key reading for all those working on translation and discourse within translation studies and linguistics. 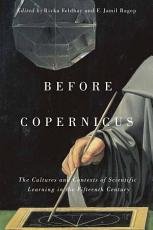 Book Description:
In 1984, Noel Swerdlow and Otto Neugebauer argued that Nicolaus Copernicus (1473–1543) explained planetary motion by using mathematical devices and astronomical models originally developed by Islamic astronomers in the thirteenth and fourteenth centuries. Was this a parallel development, or did Copernicus somehow learn of the work of his predecessors, and if so, how? And if Copernicus did use material from the Islamic world, how then should we understand the European context of his innovative cosmology? Although Copernicus’s work has been subject to a number of excellent studies, there has been little attention paid to the sources and diverse cultures that might have inspired him. Foregrounding the importance of interactions between Islamic and European astronomers and philosophers, Before Copernicus explores the multi-cultural, multi-religious, and multi-lingual context of learning on the eve of the Copernican revolution, determining the relationship between Copernicus and his predecessors. Essays by Christopher Celenza and Nancy Bisaha delve into the European cultural and intellectual contexts of the fifteenth century, revealing both the profound differences between “them” and “us,” and the nascent attitudes that would mark the turn to modernity. Michael Shank, F. Jamil Ragep, Sally Ragep, and Robert Morrison depict the vibrant and creative work of astronomers in the Christian, Islamic, and Jewish worlds. In other essays, Rivka Feldhay, Raz Chen-Morris, and Edith Sylla demonstrate the importance of shifting outlooks that were critical for the emergence of a new worldview. Highlighting the often-neglected intercultural exchange between Islam and early modern Europe, Before Copernicus reimagines the scientific revolution in a global context. 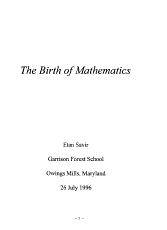 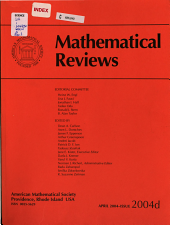 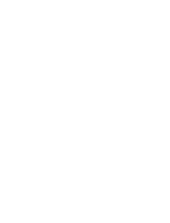 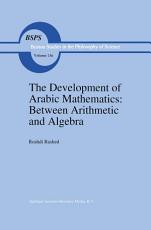 Book Description:
An understanding of developments in Arabic mathematics between the IXth and XVth century is vital to a full appreciation of the history of classical mathematics. This book draws together more than ten studies to highlight one of the major developments in Arabic mathematical thinking, provoked by the double fecondation between arithmetic and the algebra of al-Khwarizmi, which led to the foundation of diverse chapters of mathematics: polynomial algebra, combinatorial analysis, algebraic geometry, algebraic theory of numbers, diophantine analysis and numerical calculus. Thanks to epistemological analysis, and the discovery of hitherto unknown material, the author has brought these chapters into the light, proposes another periodization for classical mathematics, and questions current ideology in writing its history. Since the publication of the French version of these studies and of this book, its main results have been admitted by historians of Arabic mathematics, and integrated into their recent publications. This book is already a vital reference for anyone seeking to understand history of Arabic mathematics, and its contribution to Latin as well as to later mathematics. The English translation will be of particular value to historians and philosophers of mathematics and of science. 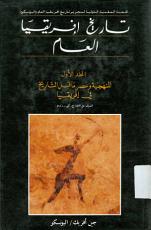 Book Description:
The earliest man and the prehistory of Africa according to geographical areas, with the Nile Valley singled out in particular. Chapters are devoted to prehistoric art, agricultural techniques and the development of metallurgy.