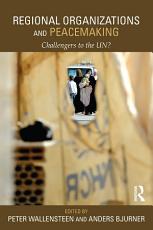 Book Description:
This book analyses the new and difficult roles of regional organizations in peacemaking after the end of the Cold War and how they relate to the United Nations (UN). Regional organizations have taken an increasingly prominent role in international efforts to deal with international security. The book highlights the complex interaction between the regional and sub-regional organizations, on the one hand, and their relations with the United Nations, on the other. Thus, the general issues of UN and its authority are scrutinized from legal, practical and geopolitical perspectives. Taking on a broad geographical focus on Africa, the Arab world and Europe, the book also provides an extensive range of case studies, with detailed analysis of particular situations, organizations and armed conflicts. The authors scrutinise the heterogeneous relationship between the different organizations as well as the challenges to them: political resources, legal standing, financial assets, capabilities and organizational set up. Moreover, they investigate whether regional organizations, as compared to the UN, are better suited to deal with today’s intra-state conflicts. The book also aims to dissect the evolution of these institutions historically – in relation to Chapter VIII of the UN Charter which mentions the resort to 'regional arrangements’ for conflict management – as well as more generally in relation to the principles of international law and UN principles of peacemaking. This book, written by a mixture of established scholars, diplomats and high-level policymakers, will be of great interest to students as well as practitioners in the field of peace and conflict studies, regional security, international organisations, conflict management and IR in general. 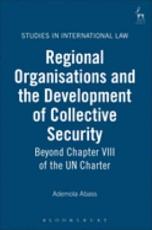 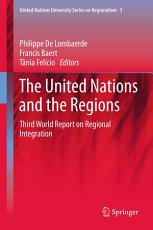 Book Description:
This unique book investigates the implications of the rising importance of supra-national regional organizations for global governance in general, and for the United Nations, in particular. It touches upon issues such as regional representation at the UN, high-level dialogues with regional organisations, as well as the coordination of UN member states’ voting behaviour in the UN General Assembly and the UN Security Council. The book further explores the regional dimension and coordination of UN operations in areas such as peace and security, human rights, and sustainable development. The contributions to the book are both in-depth chapters and shorter viewpoints, written by a combination of academics, policy-makers at regional organizations, and experts from international think tanks. The book is essential reading for anyone interested in the future of global governance. 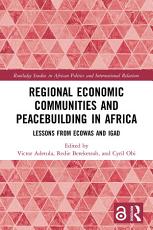 Book Description:
This book outlines challenges to the effective operation of Regional Economic Communities (RECs) with regards to peacebuilding in Africa. Critically examining these issues from an interdisciplinary perspective, with a focus on comparative analysis of the status, role, and performances of the Economic Community of West African States (ECOWAS) and Intergovernmental Authority on Development (IGAD), it examines particular constraints to their effective participation in regional initiatives. Focussing on inadequate technical capabilities, the complicity of state and non-state actors in conflicts within a region, the domestic politics of member states, it additionally pans out to address related theories and practices of peacekeeping, security, development, and the peacebuilding nexus. It also engages provisioning, regionalism and regional peacekeeping interventions, the legal and institutional framework of RECs, and civil society and peacebuilding. Fundamentally, the book asks how effective the alliances and partnerships are in promoting regional peace and security and how much they are compromised by the intervention of external powers and actors, exploring new ideas and actions that may strengthen capacities to address the peacebuilding challenges on the continent effectively. This book will be of key interest to scholars and students of African politics and studies, peace and security studies, regionalism studies, policy practitioners in the field of African peacebuilding, and more broadly to international relations. 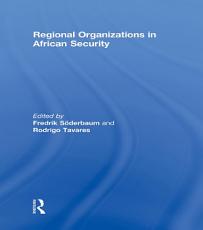 Book Description:
The African continent is plagued by some of the most brutal and violent conflicts in the world. At the same time that warfare is changing, so has the state’s capacity to provide security and political stability to its citizens. This book deals with the role of regional organizations in Africa’s security. It focuses on three basic—yet often overlooked—questions: (1) the advantages and disadvantages of African regional and sub-regional organizations vis-à-vis other security mechanisms, (2) the official and unofficial reasons to intervene, and (3) whether security is actually protected by the peace activities carried out by the regional organizations. The contributors to the book—all leading researchers in the field—systematically assess and compare the role of the African Union (AU), the Economic Community of West African States (ECOWAS), the Intergovernmental Authority on Development (IGAD), the Economic Community of Central African States (ECCAS), and the Southern African Development Community (SADC). This book was based on a special issue of African Security. 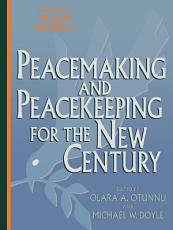 Book Description:
The UN's record in peace operations is long, various, distinguished by both accomplishments and failures, and most importantly, innovative. Unfulfilled expectations and escalating violence in Somalia, Rwanda, and Bosnia forced retrenchment upon UN peace operations_but at the same time, a new opportunity to enhance capacities, review strategies, redefine roles, and reaffirm responsibilities has opened up. Here, a dynamic group of leading diplomats, academics, and journalists combines forces with UN policymakers and leaders including current Secretary-General Kofi Annan and former Secretary-General Boutros Boutros-Ghali to explore how the international community can improve its practice in negotiating and implementing peace. They look at what works and what doesn't in UN peacemaking and peacekeeping, and then map out alternative futures for UN action in the 21st century.

Book Description:
As an emerging Continent, with a rich past, dynamic present and promising future, Africa has an important role to play in the develop ment of international organization. Well before Africa Year, 1960, when several African States attained their independence and their rightful place in the community of nations, the various movements for unity and co-operation strove towards the creation of regional international organization. Now more than ever before, nearly two scores of African States, members of the United Nations, the Organization of African Unity and several other sub-regional organizations and arrangements, look upon international organization as an important means for safeguard ing their independence, enhancing African identity, forging collabor ative bonds amongst themselves and with the outside world, and rais ing the standard of living for their populations. It should also be noted that the age of science and technology which is, and should be, based on international co-operation, stimulates fur ther Africa's desire to strengthen and work through international inter governmental organizations. As Africa faces the I970's, confronting the core problems of colonial ism and apartheid in its southern parts, she looks upon the United Nations and the Organization of African Unity as the main vehicles for thought and action. For these considerations, the present book resulting from the St. 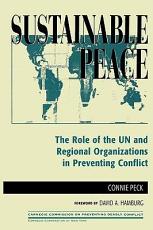 Book Description:
This book argues that the most sustainable means of promoting peace within states is the development of good governance, which can address the root causes of conflict and meet basic human security needs. Good governance offers groups a 'voice' in resolving grievances at an early stage before they grow into major problems, safeguards human rights, and promotes a fairer distribution of resources. 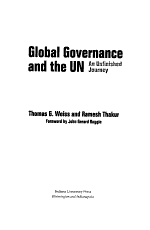 Book Description:
How gaps in global governance impact the world's most challenging problems 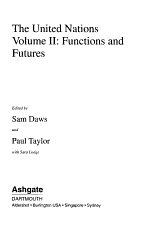 Book Description:
The International Library of Politics and Comparative Government is an essential reference series which compiles the most significant journal articles in comparative politics over the past 30 years. It makes readily accessible to teachers, researchers and students, an extensive range of essays which, together, provide an indispensable basis for understanding both the established conceptual terrain and the new ground being broken in the rapidly changing field of comparative political analysis. These two volumes include articles which examine the system, the structure, the function and the future of the United Nations.