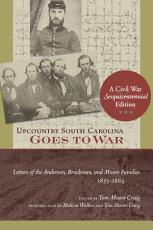 Book Description:
Upcountry South Carolina Goes to War chronicles the lives and concerns of the Anderson, Brockman, and Moore families of piedmont South Carolina during the late-antebellum and Civil War eras through 124 letters dated 1853 to 1865. The letters provide valuable firsthand accounts of evolving attitudes toward the war as conveyed between battlefronts and the home front, and they also express rich details about daily life in both environments. As the men of service age from each family join the Confederate ranks and write from military camps in Virginia and the Carolinas, they describe combat in some of the war's more significant battles. Though the surviving combatants remain staunch patriots to the Southern cause until the bitter end, readers witness in their letters the waning of initial enthusiasm in the face of the realities of warfare. The corresponding letters from the home front offer a more pragmatic assessment of the period and its hardships. Emblematic of the fates of many Southern families, the experiences of these representative South Carolinians are dramatically illustrated in their letters from the eve of the Civil War through its conclusion. 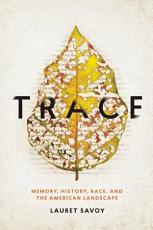 Book Description:
Winner of the ASLE Creative Writing Award Winner of the American Book Award from the Before Columbus Foundation Finalist for the PEN American Open Book Award Finalist for the Phillis Wheatley Book Award Shortlisted for the William Saroyan International Prize for Writing Shortlisted for the Orion Book Award "I stand in awe of Lauret Savoy's wisdom and compassionate intelligence. Trace is a crucial book for our time, a bound sanity, not a forgiveness, but a reckoning." ––Terry Tempest Williams Sand and stone are Earth's fragmented memory. Each of us, too, is a landscape inscribed by memory and loss. One life-defining lesson Lauret Savoy learned as a young girl was this: the American land did not hate. As an educator and Earth historian, she has tracked the continent’s past from the relics of deep time; but the paths of ancestors toward her—paths of free and enslaved Africans, colonists from Europe, and peoples indigenous to this land—lie largely eroded and lost. In this provocative and powerful mosaic of personal journeys and historical inquiry across a continent and time, Savoy explores how the country’s still unfolding history, and ideas of “race,” have marked her and the land. From twisted terrain within the San Andreas Fault zone to a South Carolina plantation, from national parks to burial grounds, from “Indian Territory” and the U.S.-Mexico Border to the U.S. capital, Trace grapples with a searing national history to reveal the often unvoiced presence of the past. In distinctive and illuminating prose that is attentive to the rhythms of language and landscapes, she weaves together human stories of migration, silence, and displacement, as epic as the continent they survey, with uplifted mountains, braided streams, and eroded canyons. 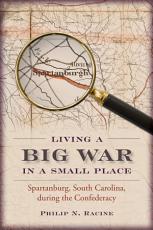 Book Description:
Most of what we know about how the Civil War affected life in the Confederacy is related to cities, troop movements, battles, and prominent political, economic, or military leaders. Far less is known about the people who lived in small Southern towns remote from marching armies or battles. Philip N. Racine explores life in one such place—Spartanburg, South Carolina—in an effort to reshape the contours of that great conflict. By 1864 life in most of the Confederacy, but especially in rural towns, was characterized by scarcity, high prices, uncertainty, fear, and bad-tempered neighbors. Shortages of food were common. People lived with constant anxiety that a soldiering father or son would be killed or wounded. Taxes were high, inflation was rampant, good news was scarce and seemed to always be followed by bad. The slave population was growing restive as their masters’ bad news was their good news. Army deserters were threatening lawlessness; accusations and vindictiveness colored the atmosphere and added to the anxiety, fear, and feeling of helplessness. Often people blamed their troubles on the Confederate government in faraway Richmond, Virginia. Racine provides insight into these events through personal stories: the plight of a slave; the struggles of a war widow managing her husband’s farm, ten slaves, and seven children; and the trauma of a lowcountry refugee’s having to forfeit a wealthy, aristocratic way of life and being thrust into relative poverty and an alien social world. All were part of the complexity of wartime Spartanburg District. 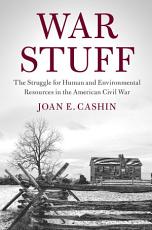 Book Description:
Focuses on the intense struggle over human and material resources between armies and civilians in the Civil War South. 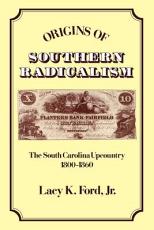 Book Description:
In the sixty years before the American Civil War, the South Carolina Upcountry evolved from an isolated subsistence region that served as a stronghold of Jeffersonian Republicanism into a mature cotton-producing region with a burgeoning commercial sector that served as a hotbed of Southern radicalism. This groundbreaking study examines this startling evolution, tracing the growth, logic, and strategy of pro-slavery radicalism and the circumstances and values of white society and politics to analyze why the white majority of the Old South ultimately supported the secession movement that led to bloody civil war. 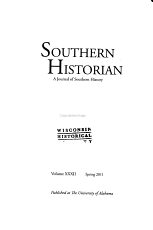 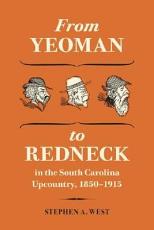 Book Description:
In From Yeoman to Redneck in the South Carolina Upcountry, Stephen A. West revises understandings of the American South by offering a new perspective on two iconic figures in the region’s social landscape. "Yeoman," a term of praise for the small landowning farmer, was commonly used during the antebellum era but ultimately eclipsed by "redneck," an epithet that emerged at the end of the nineteenth century. In popular use, each served less as a precise class label than as a means to celebrate or denigrate the moral and civic worth of broad groups of white men. Viewing these richly evocative figures as ideological inventions rather than sociological realities, West examines the divisions they obscured and the conflicts that gave them such force. The setting for this impressively detailed study is the Upper Piedmont of South Carolina, the sort of upcountry region typically associated with the white "plain folk." West shows how the yeoman ideal played a vital role in proslavery discourse before the Civil War but poorly captured the realities of life, with important implications for how historians understand the politics of slavery and the drive for secession. After the Civil War, the South Carolina upcountry was convulsed by the economic transformations and political conflicts out of which the redneck was born. West reinterprets key developments in the history of the New South--such as the politics of lynching and the phenomenon of the "Southern demagogue"--and uncovers the historical roots of a stereotype that continues to loom large in popular understandings of the American South. Drawing together periods and topics often treated separately, West combines economic, social, and political history in an original and compelling account. 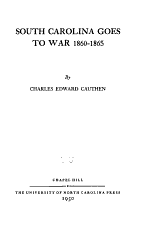 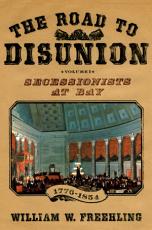 Book Description:
Far from a monolithic block of diehard slave states, the South in the eight decades before the Civil War was, in William Freehling's words, "a world so lushly various as to be a storyteller's dream." It was a world where Deep South cotton planters clashed with South Carolina rice growers, where the egalitarian spirit sweeping the North seeped down through border states already uncertain about slavery, where even sections of the same state (for instance, coastal and mountain Virginia) divided bitterly on key issues. It was the world of Jefferson Davis, John C. Calhoun, Andrew Jackson, and Thomas Jefferson, and also of Gullah Jack, Nat Turner, and Frederick Douglass. Now, in the first volume of his long awaited, monumental study of the South's road to disunion, historian William Freehling offers a sweeping political and social history of the antebellum South from 1776 to 1854. All the dramatic events leading to secession are here: the Missouri Compromise, the Nullification Controversy, the Gag Rule ("the Pearl Harbor of the slavery controversy"), the Annexation of Texas, the Compromise of 1850, and the Kansas-Nebraska Act. Freehling vividly recounts each crisis, illuminating complex issues and sketching colorful portraits of major figures. Along the way, he reveals the surprising extent to which slavery influenced national politics before 1850, and he provides important reinterpretations of American republicanism, Jeffersonian states' rights, Jacksonian democracy, and the causes of the American Civil War. But for all Freehling's brilliant insight into American antebellum politics, Secessionists at Bay is at bottom the saga of the rich social tapestry of the pre-war South. He takes us to old Charleston, Natchez, and Nashville, to the big house of a typical plantation, and we feel anew the tensions between the slaveowner and his family, the poor whites and the planters, the established South and the newer South, and especially between the slave and his master, "Cuffee" and "Massa." Freehling brings the Old South back to life in all its color, cruelty, and diversity. It is a memorable portrait, certain to be a key analysis of this crucial era in American history. 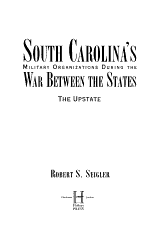 Book Description:
In this anticipated four-volume series, author Robert Seigler presents a comprehensive review of South Carolina's Civil War troops in incomparable detail. Revealing the origination of military organizations from the three major geographical regions of the state, as well as those units whose men came from all parts of the state, Seigler outlines the frontline infantry, cavalry and artillery units, as well as militia, reserves and state troops that were critical to the Confederate efforts.