Book Description:
According to common perception, the Federal Republic of Germany supported the formation of the Israeli state for moral reasons - to atone for its Nazi past - but did not play a significant role in the Arab-Israeli conflict. However, the historical record does not sustain this narrative.Daniel Marwecki's pathbreaking analysis deconstructs the myths surrounding the odd alliance between Israel and post-war democratic Germany. Thorough archival research shows how German policymakers often had disingenuous, cynical or even partly antisemitic motivations, seeking to whitewash their Nazipast by supporting the new Israeli state. This is the true context of West Germany's crucial backing of Israel in the 1950s and '60s. German economic and military support greatly contributed to Israel's early consolidation and eventual regional hegemony. This initial alliance has affected Germany'srole in the Israeli-Palestinian conflict to the present day.Marwecki reassesses German foreign policymaking and identity-shaping, and raises difficult questions about German responsibility after the Holocaust, exploring the many ways in which the genocide of European Jews and the dispossession of the Palestinians have become tragically intertwined in theMiddle East's international politics. This long overdue investigation sheds new light on a major episode in the history of the modern Middle East. 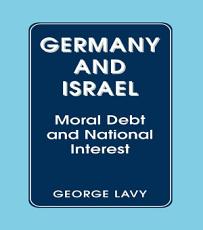 Book Description:
In 1952, the Federal Republic of West Germany concluded a treaty with Israel whereby the Germans had to pay three billion Deutschmarks in compensation for the Holocaust. However, the Israelis felt that Germany owed Israel a moral as well as a financial debt, and thus expected further aid and protection. Although Germany made several concessions in favour of the Jewish State, particularly in the domain of armament, as Germany's political status increased, its national interest gradually took priority over that of Israel. This book examines the grounds which motivated Germany to grant aid to Israel and the change in their relations as the German economy flourished and gained influence in world affairs. 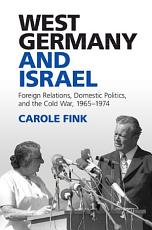 Book Description:
A new history of the West German-Israeli relationship as these two countries faced terrorism, war, and economic upheaval in a global Cold War environment. 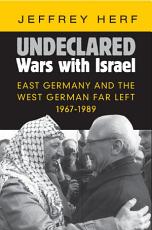 Book Description:
Undeclared Wars with Israel examines a spectrum of antagonism by the East German government and West German radical leftist organizations - ranging from hostile propaganda and diplomacy to military support for Israel's Arab armed adversaries - from 1967 to the end of the Cold War in 1989. This period encompasses the Six-Day War (1967), the Yom Kippur War (1973), Israel's invasion of Lebanon in 1982, and an ongoing campaign of terrorism waged by the Palestine Liberation Organization against Israeli civilians. This book provides new insights into the West German radicals who collaborated in 'actions' with Palestinian terrorist groups, and confirms that East Germany, along with others in the Soviet Bloc, had a much greater impact on the conflict in the Middle East than has been generally known. A historian who has written extensively on Nazi Germany and the Holocaust, Jeffrey Herf now offers a new chapter in this long, sad history. 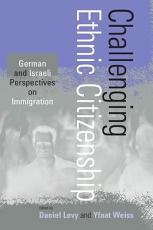 Book Description:
Sa'ed Atshan and Katharina Galor draw on ethnographic fieldwork and interviews to explore the asymmetric relationships between Germans and Israeli and Palestinian immigrants in the context of official German policies, public discourse, and the impact of coming to terms with the past. 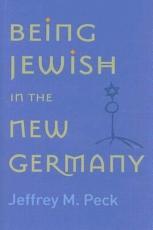 Book Description:
Germany today boasts the fastest growing population of Jews in Europe. The streets of Berlin abound with signs of a revival of Jewish culture, ranging from bagel shops to the sight of worshipers leaving synagogue on Saturday. With the new energy infused by Jewish immigration from Russia and changes in immigration and naturalization laws in general, Jeffrey M. Peck argues that we must now begin considering how Jews live in Germany rather than merely asking why they would choose to do so. In Being Jewish in the New Germany, Peck explores the diversity of contemporary Jewish life and the complex struggles within the community-and among Germans in general-over history, responsibility, culture, and identity. He provides a glimpse of an emerging, if conflicted, multicultural country and examines how the development of the European Community, globalization, and the post-9/11 political climate play out in this context. With sensitive, yet critical, insight into the nation's political and social life, chapters explore issues such as the shifting ethnic/national makeup of the population, changes in political leadership, and the renaissance of Jewish art and literature. Peck also explores new forms of anti-Semitism and relations between Jews and Turks-the country's other prominent minority population. In this surprising description of the rebirth of a community, Peck argues that there is, indeed, a vibrant and significant future for Jews in Germany. Written in clear and compelling language, this book will be of interest to the general public and scholars alike.

Book Description:
Since the Euro crisis began, Germany has emerged as Europe's dominant power. During the last three years, German Chancellor Angela Merkel has been compared with Bismarck and even Hitler in the European media. And yet few can deny that Germany today is very different from the stereotype of nineteenth- and twentieth-century history. After nearly seventy years of struggling with the Nazi past, Germans think that they more than anyone have learned its lessons. Above all, what the new Germany thinks it stands for is peace. Germany is unique in this combination of economic assertiveness and military abstinence. So what does it mean to have a "German Europe" in the twenty-first century? In The Paradox of German Power, Hans Kundnani explains how Germany got to where it is now and where it might go in future. He explores German national identity and foreign policy through a series of tensions in German thinking and action: between continuity and change, between "normality" and "abnormality," between economics and politics, and between Europe and the world.

Book Description:
Since the refugee crisis of 2015, the topic of migration has moved to the center of global political debates. Despite the frequently invoked notion that current developments are without historical precedent, migration has been a constant feature of contemporary history, particularly in Europe. Jannis Panagiotidis considers a particular type of migration, co-ethnic migration, where migrants seek admission to a country based on their purported ethnicity or nationality being the same as the country of destination. Panagiotidis looks at immigration from Germany to Israel in three individual cases where migrants were not allowed to enter the country. These rejections confound notions of an "open door" or a "return to the homeland" and present contrasting ideas of descent, culture, blood, and race. Panagiotidis shows that migration is never a simple matter of moving from place to place. Questions of historical origins, immigrant selection and screening, and national belonging are deeply ambiguous and complicate migration even in nations that are purported to be ethnically homogenous.