Book Description:
Exciting full-color and black-and-white photographs mark a chronicle of the birth of rap music in contemporary America, tracing its roots back to traditions thousands of years old and discussing its effect on today's young. 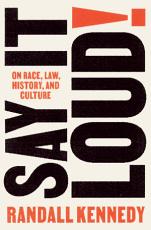 Book Description:
A gathering of essays by the acclaimed Harvard legal scholar and public intellectual, that explores all the relevant cultural and historical issues of the past quarter-century having to do with race and race relations in America. With a gimlet eye, decency, and humaneness (and often courting controversy), Randall Kennedy chronicles his reactions over the past quarter-century to arguments, events, and people that have compelled him to put pen to paper. Three beliefs that are sometimes in tension with one another infuse these pages. First, a massive amount of cruel racial injustice continues to beset the United States of America, an ugly reality that has become alarmingly obvious with the ascendancy of Donald J. Trump and the various political, cultural, and social pathologies that he and many of his followers display and reinforce. Second, there is much about which to be inspired when surveying the African American journey from slavery to freedom to engagement in practically every aspect of life in the United States. Third, an openness to complexity, paradox, and irony should attend any serious investigation of human affairs. Kennedy has tried to allow that sensibility ample leeway in the essays, prompting within himself surprise, ambivalence, and, on several occasions, a heartfelt need to express apology for prior oversights and mistaken judgments. Say It Loud! is nothing less than Randall Kennedy's magnum opus. 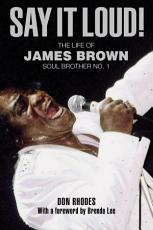 Book Description:
When Don Rhodes took his seat not far behind Michael Jackson at the funeral of the “Godfather of Soul” on December 30, 2006, it marked the close of a forty-year friendship. In Say It Loud! Rhodes pays tribute to James Brown and his storied career, with a close and comprehensive look at the life of the legendary singer at his home in Augusta, Georgia, and the family he left behind. From the evolution of Brown’s fiery, uniquely rhythmic musical style to his social activism, world travels, run-ins with the law, and four marriages (and uncertain number of affairs), Rhodes provides a sensitive but candid look at the life of the man behind such hits as “I Feel Good,” “Please, Please, Please,” “Sex Machine,” and “Say It Loud—I’m Black and I’m Proud.” He takes us back to the 1960s, when James Brown and other American soul and rock artists were relieved to find that they had nothing to fear from the Beatles and other British artists taking America by storm—indeed, as some of the Brits acknowledged, the Americans had inspired them. Mick Jagger, whose dance steps were influenced by Brown, once said of him, “His show didn’t just have to do with the artist but had to do with the audience. . . . Their reaction was always . . . like being in a church.” Unlike his friend Elvis Presley, James Brown went on to be a frequent global traveler, adored by fans throughout the world. Say It Loud! bears out the reputation of the man with the famous cape as “the hardest-working man in show business,” bringing us the full story of a conscientious performer and consummate professional with a fascinating and controversial personal life. Never-before-published photos, as well as anecdotes from an enduring friendship and details of Brown’s life at home, will further ensure that music fans of all ages will cherish this tribute to an American icon by a longtime friend. 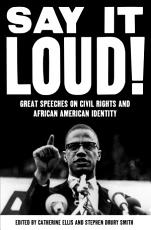 Book Description:
Following Say It Plain, a collection of speeches that provides “a sweeping perspective on evolving issues of black identity in the struggle for equality” (Booklist). In “full-throated public oratory, the kind that can stir the soul”, Say It Plain collected and transcribed speeches by some of the twentieth century’s leading African American cultural, literary, and political figures. Many of the speeches were never before available in printed form (Minneapolis Star-Tribune). Following the success of that groundbreaking volume, the Say It Loud! book adds new depth to the history of the modern struggle for racial equality and civil rights—focusing directly on the pivotal questions black America grappled with during the past four decades of resistance. With recordings unearthed from libraries and sound archives, and made widely available here for the first time, Say It Loud! includes powerful speeches by Malcolm X, Angela Davis, Martin Luther King Jr., James H. Cone, Toni Morrison, Colin Powell, and many others. Bringing the rich immediacy of the spoken word to a vital historical and intellectual tradition, Say It Loud! illuminates the diversity of ideas and arguments pulsing through the black freedom movement. 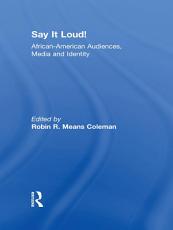 Book Description:
First Published in 2002. Routledge is an imprint of Taylor & Francis, an informa company. 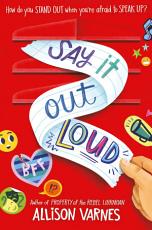 Book Description:
Self-conscious of her stutter, Charlotte says nothing as her best friend is bullied, but as the school year goes on she realizes some things are worth speaking up for.

Book Description:
The journey of a real cowboy. When Heath Ledger finished reading the script for Brokeback Mountain - a film about a love affair between two American cowboys - he thought of his friend Adam Sutton, and told him, 'I've just read this script and it sounds a lot like you.' He was right: Adam's own life was reflected in many of the film's themes. Brokeback Mountain went on to establish itself as a cultural landmark and its impact was felt far beyond the cinema: it was a human story, not a gay story, and audiences of every type responded around the world. Similarly, when Adam Sutton's story appeared on the front page of the Sydney Morning Herald, the response was immediate and extraordinary. 'Meet Heath's mate, the real gay cowboy,' the headline ran, and thousands did - setting a sales record for the paper, and prompting the TV program Australian Story to devote an episode to Adam's story. By nature Adam is a masculine daredevil who survives on the strength of his boisterous character. He is 'the crazy bastard' - the maddest, bravest bloke in the room - who has faced tragedy, a prison stint, and five long years on the road, but who could not face himself. His extraordinary and unlikely journey from the world of cowboys, rodeos and stereotypes, to Hollywood and, finally, to self-acceptance, is a powerful reminder that sometimes truth is even stranger than Hollywood fiction.

Book Description:
Breaking the silence about sexual abuse is vital—but it’s only the first step. What happens next? For most survivors, the wounds caused left by such abuse are often left to fester, slowly destroying their lives. Say It Out Loud—a unique blend of memoir and how-to—exposes the emotional scars of sexual abuse and explains the process of healing. In straightforward prose, step by step, Roberta Dolan provides readers with tangible healing strategies, including journaling, visualization, and more, that she employed during her own years in therapy for a childhood of sexual abuse. Inspiring and accessible, Say It Out Loud offers guidance and support for any kind of healing journey, equipping readers with the skills and courage to transform a life of darkness into one of joy.